Well, we may not have ‘come through’ Covid just yet, but we have come through a lot of it, and we have come through an ‘annus horribilis’, and brought it to a ‘mirum conclusioni’. A marvellous ending indeed. After many months of enforced separation and choral inactivity, Oriana was able to regroup and finish the year with a wonderful concert season, sounding as good as we’ve sounded in years, and with our family culture well and truly intact.

It’s now fifteen years since Oriana was founded. Some of those who were there from day one are still here. Some, like myself, have been here for most of the past fifteen years. Others have joined at various points along the way. Some have stayed, some have gone on to other things. If you counted up all present and past members, there would be two hundred or more. We have all, as Orianians, seen, done, travelled and achieved a lot in those fifteen years.

It seems an appropriate moment to look back, and briefly summarise our history, from our genesis – to see and remember where we have come from – to where we are now, and how we got here.

The debut concert, by The Oriana Concert Choir was presented at the Nambour Uniting Church in April 2006. In a strangely prescient way, the repertoire foreshadowed the eclectic journey that the choir was embarking on. Sources as varied as opera (Puccini), art-song (Vaughan-Williams, Dvorak), madrigals, Mozart, Billy Joel, Lennon-McCartney, Gershwin, Mozart and more – all gave notice that here was a vocal ensemble that demanded one’s attention – one sensed that big things were in store.

It wasn’t long before the choir, under the directorship of its founding conductor, Daniel Calder, set about taking on some significant classical choral works. In 2007, in addition to the sacred concert “Laudate Dominum!” (Oriana’s first performance in St. John’s Cathedral, Brisbane), and “The Sixties” (the first ‘cabaret’ style presentation), Oriana presented Vivaldi’s ‘Gloria” and Schubert’s Mass in G.

From there, the choir was seemingly unstoppable. The following is a representative, but by no means exhaustive sample of what Oriana has done over the years: 2008 –“The Seventies – A Musical Revue” First presentation of Handel’s “Messiah” 2009 –“Haydn Seek” – a programme featuring songs by Haydn, Robert Burns, Mendelssohn and others – this was the choir’s first collaboration with Paul Holley “Lounge Swing Jazz” – a collection of jazz standards and classics from across the entire jazz Era, from the 20s to the 80s 2010 –“Joy And Lamentation” – comprising Mozart’s “Requiem” and Haydn’s “Te Deum” . 2011 –“The Movies – Songs From the Screen” Handel’s “Messiah” for the second time

2017 –“Haydn Sunrise” – a concert which saw the launch of our “Cathedral Dreaming” CD, and also the first performance of Ola Gjeilo’s “Sunrise Mass”. 2018 –Karl Jenkins’ “The Armed Man: A Mass For Peace” 2019 –“Lux Aeterna” – sacred songs performed on Oriana’s 2019 concert tour of Italy “G & S and Opera Choruses – Songs You Will Know and Love”

Add to the above list - several Eisteddfod attendances, of which Oriana won five; a number of Christmas concerts; countless Mother’s Day, benefit, and ‘themed’ concerts; small ensemble appearances, including the odd paid private gig; choral festivals; 2 flash-mob performances of the “Hallelujah Chorus”; and three highly successful and hugely enjoyable European concert tours; and you can see that the choir has been very busy, very productive, and very successful.

There have been changes over the years. Daniel called it a day at the end of 2015, and we welcomed Sandra Milliken as our new Music Director. Sandra over saw our “Cathedral Dreaming” recording, conducted us around concert halls and churches in Central Europe, and guided and led us through a series of very successful concert seasons over the next two years. In 2018, Oriana adopted a new model, whereby we have a different music director for each season, overseen by Oriana’s Artistic Director, Fay Baker. The primary, and very significant benefit of this new model has been that each succeeding season has a fresh approach, and it keeps the choir ‘stretching’ itself, and broadening its experience and expertise.

There have been name changes to Oriana – We’ve been the Oriana Concert Choir, The Sunshine Coast Oriana Choir, and now, simply and concisely, Oriana Choir. There have been many collaborations – with the Brisbane and Queensland Symphony Orchestras, Pacific Chamber Players, Queensland Session Orchestra, Victoria Chorale and Blackstone Ipswich Cambrian Choir.

In 2020, the incomparable Fay Baker was very rightly recognised for her services to music by being awarded the Order of Australia Medal. A proud day for Fay; a proud day for us all.

In 2009, The Sunshine Coast Oriana Youth Choir came into being, with Scott and Libby Gaedtke as founding conductor and music director respectively. Over the years, the Youth Choir, now known as the Sunshine Coast Youth Choir, has performed many times with Oriana, and in their own right, and taken part successfully in several Eisteddfod competitions and choral festivals. Their own story continues.

Through all Oriana’s history – the changes of leadership, name and organisational structure, one of the things that has remained constant is the sense, felt by all members, that Oriana is a family. There has always been a culture of looking out for one another. It’s not easy to pinpoint exactly why that is, but I think it has something to do with the fact that, for the vast majority of us, if indeed not all of us, Oriana is simply the most amazing group entity that any of us have ever been a part of. Speaking for myself, I can honestly say that I’ve never been a part of any organisation, be it theatrical, musical or anything else, for which I’ve felt such enthusiasm and passion. In simplest terms, we just love Oriana.

What a time it was! 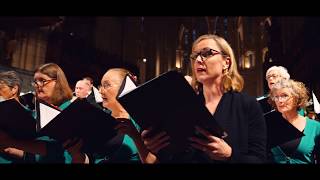